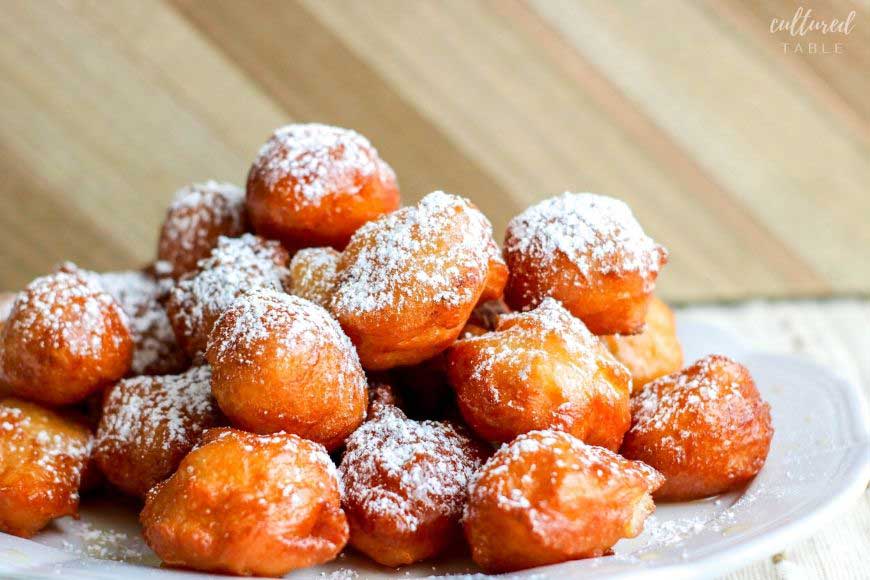 Serve these Greek donuts — Loukoumades — with a drizzle of honey, a sprinkle of cinnamon, and some toasted walnuts.

Sometimes referred to as lokma, these doughnuts are popular in Turkey, Egypt, and Greece. Some say these sweet Greek donuts were served at the first Greek Olympic games! One thing is certain: These syrup drenched dough balls have some staying power.

These sweet Greek doughnuts start with a yeast dough. Fried to golden perfection, they’re covered in a honey syrup and sprinkled with cinnamon and powdered sugar for delightfully sweet treat.

Making yeast dough might sound daunting, but it’s really pretty easy. You’ll just need to make sure that you allow enough time for the dough to rise. In this case, about an hour. You don’t have to actually do anything during the rise time — put your feet up and relax!

When the dough had doubled in size, use a scoop or your hands to create two-inch dough balls. Gently place the balls in the hot oil. Safety is paramount when you’re working with hot oil. It can splatter and burn.

As the loukoumades cook in the oil, they may roll over on their own. If not, you’ll need to give them a little assist. Fry for 2 to 3 minutes on each side, then remove from the hot oil with a slotted spoon or mesh skimmer. Drain on paper towels.

Once all of the loukoumades are golden brown, it’s time to dip and roll them in honey syrup. When they’re all coated, place the doughnuts on a serving tray and sprinkle with powdered sugar, cinnamon, and — optionally — toasted walnuts.